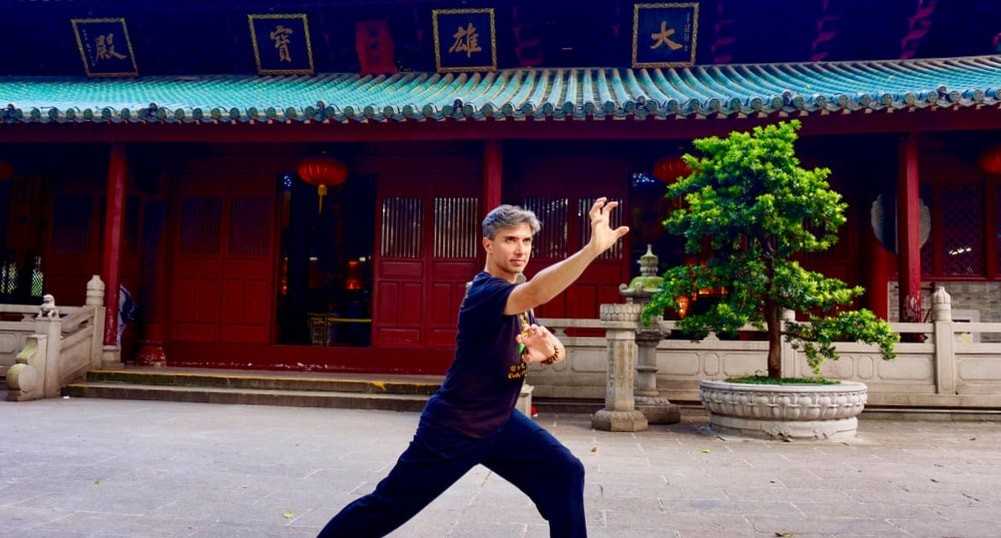 Since the age of 12 Alex Lamas has been involved with the martial arts. In 1996 he enrolled in the Fu Jow Pai system of Kung Fu under Master Shue Yiu Kwan and in 2001 he became an instructor at Kwan’s Kung Fu and is a current member of the Kwan’s Kung Fu Chinese Lion Dance Team. Other systems that Alex Lamas has studied are Tae Kwon Do, Judo, Shotokan Karate and Tai Chi in 1998, that he continues to develop under his teachers Master Kwan and Grand Master Wai Hong.

As a Kung Fu and Tai Chi Instructor, Sifu Lamas has brought his program to schools, campuses  and is also teaching Tai Chi to autistic populations. Alex Lamas is a practicing Buddhist who took refuge under Ven. Dhamadipa, Abbott of Chuang Yen Monastery in Carmel, NY. He has been studying meditation for 20years and is an official guide at Chuang Yen Monastery. In addition,  he attained a B.A. in Cultural Anthropology from Purchase College. Sifu Lamas currently teaches Kung Fu and Tai Chi in Westchester and the Bronx, NY.

"For me martial arts are as much about self-defense as they are about self-cultivation. So we learn martial arts to know ourselves and express who we are. I teach to the student not the system and I never teach the same way for each person. Each is an individual and must be guided according to his or her own talents. For the Shaolin Monks and all martial art practitioners throughout history, Kung Fu was not only a system of self-defense but a way of personal growth. It's my aim to uphold this tradition and pass it on to others in the continuing generations.

Kung Fu has been the one constant that has anchored me in life's eddies and flows. It's the path that brings me back my true nature, no matter how far I might wonder off. It shows me that I'll never be perfect but I can always be better."